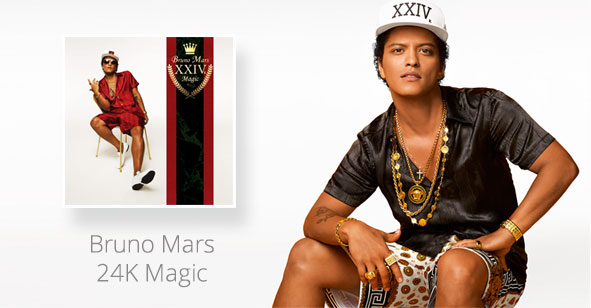 24K Magic is the third studio album by American singer and songwriter Bruno Mars. It was released worldwide on November 18, 2016, by Atlantic Records. The follow-up to Mars’s successful sophomore album, Unorthodox Jukebox, it explores genres similar to those of its predecessor, such as soul and funk, while Mars and his team focused on capturing the R&B sound that was very popular in the 90’s, described by the singer as the reason he fell in love with music in the first place. Recording sessions for the album took place between early 2015 and September 2016 at Glenwood Place Studios in Burbank, California. The production of the album was handled by newly formed production trio Shampoo Press & Curl, consisting of Mars, Brody Brown and Philip Lawrence.

It is considered by critics to be Mars’s first album to have a less unorthodox overall sound and contain more coherence and subtlety in terms of style and genre. It is also the first album by Mars to enter the R&B and hip hop charts on Billboard, staying atop the R&B albums chart for 21 weeks, so far. Two singles were released, the title track and “That’s What I Like”, the latter of which became Mars’s seventh number one on Billboard Hot 100. As of March 2017, the album has sold over 1 million album-equivalent units in the United States.